For most of its history, Portland’s streetcar service was a mix of lines owned by a number of firms, and this was just as true of North and Northeast Portland as it was for the rest of the city. Among the routes operated by Portland Railway Company, for example, were the rails that ran down Alberta Street and Union Avenue (now Martin Luther King Jr. Blvd). The City and Suburban Railway Company owned the rails that ran north on Williams and west on Killingsworth. 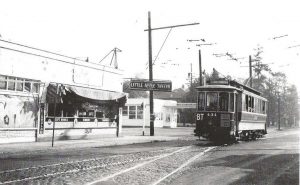 On September 1, 1904 the two lines merged and became the Portland & Suburban Railway Company, boasting 104 miles of track and dozens of trolley cars. But other firms continued to provide their own services.

One of these was the Portland Traction Company.H.R. Lowry, a resident of today’s King Neighborhood, was in charge of training Portland Traction’s streetcar operators. The December 12, 1920 Oregonian ran an article about Portland street railway system men in executive capacities who had worked their way to their present positions from “the platform”, including H.R. Lowry, who was now a “conductor instructor”.

Two years later, Lowry and his wife moved into a house on Mallory Avenue, right next door to the home of his father-in-law, Civil War veteran J.G. Chambers (see “Notes on Memorial Day in Oregon” in the Summer 2019 issue of Hey Neighbor!).

All street-car trainees were under the supervision of Lowry, who conducted oral examinations and discussion classes. It was in this capacity that Lowry was featured in the November 7, 1941 Oregonian. As reporter Bonnie Wiley wrote: “If war comes – maybe they’ll be needing women streetcar operators, like they have in England. But I really don’t think they’ll be needing me.” 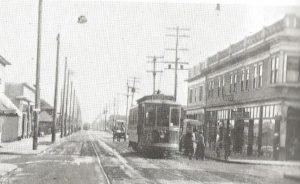 Wiley recounted trying her hand on a Montavilla car that brought the vehicle “shuddering to the last of a series of bad stops.” Lowry, “my patient instructor, shook his head in dismay…’Some people,’ said Mr. Lowry diplomatically, “just aren’t cut out to be street-car motormen.”

World War II came to the United States, of course – and women became streetcar operators. And those hired by Portland Traction were trained by Lowry. The first hire was Zada Pratt, hired as a bus driver on February 18, 1943.

By December 31, 1944 there were more than 150 women on the company’s payroll as regular operators of gas busses, trolley-busses and streetcars.  According to an article published in the Oregonian that day, “it is [now] possible to draw some conclusions concerning the performance of the weaker sex, and to learn whether or not the traveling public takes its life in its hands when it steps aboard a public conveyance operated by a woman.” The conclusion? Reporter Margaret Thompson asserted that “according to instructors and supervisors, they are learning faster and better than men trainees…and have fewer accidents”.