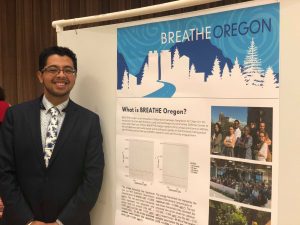 Neighbors for Clean Air [NCA] advocates for stronger air quality standards in the Portland area. As a community organizer with NCA, Akash Singh is on the frontlines of these battles, engaging with residents, businesses, and elected officials on policies that address air quality throughout the state. Although he’s steeped in the policy and science of air, he knows that rattling off a bunch of numbers is not what helps to build trust with communities.

Instead, he shows up, listens, and engages people where they are, whether that means crashing PTA meetings or attending church groups and neighborhood barbecues. The point is to build relationships within communities and to avoid being another “guy in a suit” with high-minded ideas that speak down to the people they’re supposed to help.

“It’s not enough to be at the table. You have to write the menu too.”

With an eye towards those who are most impacted by pollution, Akash centers his work on the real, long-term effects of industrial pollution on vulnerable populations and the intrinsic social disparities that are compounded by dirty air. He’ll undoubtedly take this focus on justice for all to law school, which he’ll be attending this fall.