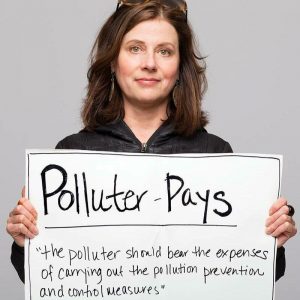 “If you had asked a few years ago if she ever imagined being an environmental activist, Jessica Applegate might have laughed out loud. But in just a few short years, she has gone from being a single working mom in East Portland to a figurehead of the local fight against air pollution.

When the now-infamous Portland State moss study revealed that Bullseye Glass was emitting toxic chemicals into her neighborhood with no regard for human health, it became personal and just like that an activist was born.Together with some other moms in the area, the Eastside Portland Air Coalition [EPAC] was born, and they came out swinging.

“Anger is a great motivator. But we always stayed solution-oriented.”

Fueled by a parents’ anger at their kids’ health being needlessly exposed to toxic pollution, they showed high-level media savvy by storming outlets with press releases and rallying community members to disrupt the usually placid public forums of regulatory agencies with a list of demands and calls for accountability.

Soon, EPAC was at the center of a fire that got national attention and ultimately motivated Bullseye Glass to invest in filtration devices. The real win, however, came later, as the fight for cleaner air in their neighborhood had organized dozens of ordinary, working parents and community members across the city, and showed that democracy is not a spectator sport.”