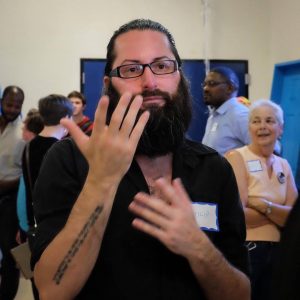 “We can make much better decisions together with science and good decision processes.“

Police brutality and police accountability. They’ve violated and lost our public trust. Police violence against protesters is obvious and known – yet they lie and continue. Police are killing people experiencing mental health crisis. Anti-houseless ordinances need to be removed and police must stop arresting them. First responders needs to be medical professionals, not the police. As a queer man, I know that Police should not be allowed to march with Pride – they are not our allies.

I will work with PPB on better strategic plans how to handle protests, and went to state police training for background knowledge necessary to do so. We must severe ties with ICE. Also, hire an independent community member as police commissioner – the Mayor’s office has failed. Replace PCCEP with new citizen oversight for policing that’s not insider-filled and seeking status quo solutions. G4S City hall security must be removed immediately. Corporate mercenaries violating community rights have no place in Portland.

First and foremost by increasing community access, inclusion and influence with fair decision processes with equal protection for all community members under the law. The status quo openness and integrity of Portland’s City Government is unacceptable. I will lead inclusive town halls when discussing policies, issues and proposals before votes at city hall and together we will transform City hall into an accessible place for all.

I will also lead in partnerships for direct action when addressing issues and transform our city government website to make it 100% accessible. We can make much better decisions together with science and good decision processes, than the failures coming from the current city commissioners and Mayor.

As a committed community leader of those systemically excluded from power and access – I have volunteered without pay for many full time non-profit organizations over the last 15 years – as the vice-President for Student Body Government at my nationally known high school, where I also formed the first LGBTQ club.

I’m the sole surviver of my entire family – of earthquakes, tornadoes, police brutality, domestic violence, family abuse and gun violence. Portland is my community and my family. I’ve lived  on my own since age 16.