But Paul Knauls Jr. is leading the effort to recast the barber and beauty salon as a charitable foundation

This past Spring, the Knauls Family made the difficult decision to close their business, Geneva’s Shear Perfection Barber and Beauty Salon. Hey Neighbor caught up with Paul Knauls Jr. to ask about the shop, its past and its future. 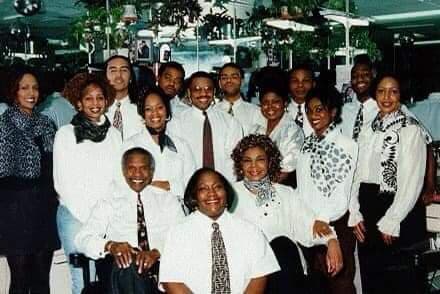 Hey Neighbor: Paul, describe the big decision to close Geneva’s. Why did it happen and who made the call?

Paul Knauls Jr.: I actually did not make the decision. My father Paul Knauls Sr. the “Mayor of Northeast Portland,” made the decision. It was him and his wife Geneva who built that business. I was in the family business for almost 30 years between Geneva’s the barbershop and Geneva’s the nightclub. And if you’ve seen the new Oregon Health Authority regulations for that industry, our business model was just not going to be successful with all of that. The number of stylists that we have, and the number of barbers that we have.

And the community — we have been privileged to serve this community for all these years, the family has been in business for over 50 years. But — how can I say it? The numbers of Covid cases across the country had high, high, high death rates and infection rates in the African American community.

And in some cases there were 40% of people in a city – and I mean 16% of the population is Black and 75% of the citywide cases were affecting us. Our business was 98% African American people, and the chances of someone getting ill — someone taking it home to their family members, their elders, their children, their grandchildren were the shop sometimes — it was just too difficult to overcome all of those challenges. It was just overwhelming.

HN: So, after that decision was made to close the business, you stepped up on social media and asked people to share their memories and to share why they think Geneva’s was important. What happened then?

Knauls Jr.: Oh wow! My God! It was a flood of posts and pictures and stories of people. How their children grew up in Geneva’s and how they remember Geneva giving them their first haircuts, and what a great barber she was and how she had a special touch; she was a Secretary of State in the community as far as the shop goes. She was the glue. And people admired the business. Geneva’s was a family, you know what I mean? It really was.

You can’t make those stories up! It’s a place where we watched young men and women come into the salon at 7-, 8-years-old and they end up working with Eric Holder at the US Department of Justice. They end up being pilots, neurosurgeons, professionals, engineers and then they come back with their children. And then one day they might come in and they might have their father with them — then you’re sitting there and there’s three generations of people sitting in that shop getting the same service that their father got, their mother got.

HN: Now I have to bring it around to the current moment. Across the country, we’re seeing huge protests and they are supporting the Black community, which I never thought I would see in my lifetime. Is it a turning point in history? And where are people bringing their unity if they can’t discuss things like this are the institutions like the barbershop?

Knauls Jr.: It’s a tipping point. Covid-19 has everyone in the world on lockdown. And the world saw an African American man killed by a police officer — they actually saw it. I’m 67 years old. Do you know how many black men and women I have seen lynched? Murdered? I remember watching TV as a young black boy with my grandfather, Chet Huntley and David Brinkley, Walter Cronkite. It was nothing to see an image of a Black man hanging from a tree. On the news, and talking about it. I saw people all my life have gone through this my entire life.

I have a 12-year-old granddaughter who had a social studies project. She said, America we love you but you don’t love us back. And that is basically an abusive relationship. That’s from a twelve-year-old child. She’s already in trauma. She’s already there. She understands it, and white people just don’t get it. They don’t get their privilege. If you’ve had it all your life – what did that lady say? A fish doesn’t know it’s living in water.

When I was a young boy of 10-years-old, my grandfather loved his garden, and he made it into the newspaper for the most beautiful garden in Spokane one year. I remember a white guy coming up the alley and he spit over the fence into my grandfather’s garden. And my grandfather saw him and said, “Hey, if you come down this alley and you spit in my garden again this will be a problem.” Now I don’t even think I was 10-years-old, but I was fearful that night. I was fearful that that man may come back and do something to my grandfather. Yeah. So it’s different on this side of the street you know what I mean?

HN: Last question. What is the single most important thing people should know about Geneva’s Shear Perfection?

Knauls Jr.: I think it’s important to realize how it got started. The lady with her name on the sign, you know? She was the first African American barber in the state of Oregon. She brought this about. Her legacy is important to the state, the city. We’re going to try to make sure that carries on. The building? We’re going to do something special there. I’m going to try to get some of my family members to start a foundation where they can maybe raise some money to do some of the good things that she would have done for the village and for people in general. She is some kind of special. Her and my father, they were a hell of a team. My dad, their philanthropic work here in the city was unending. And it continues, and we would just like to solidify that. This lady from way down south caught a train out here, did something special with her life.