Gentrification became a crucial lens through which I viewed Portland after studying the history of Albina during high school. It became increasingly apparent after I left for college, as I see brand new buildings, boutiques, and bicycles every time I drove along Williams, Alberta, or Killingsworth. When my professor assigned an open-ended final project in my Geographic Information Systems class this fall, I decided to undertake a quantitative study of residential displacement in Portland to see if data would validate my perception of Portland’s dramatic changes. 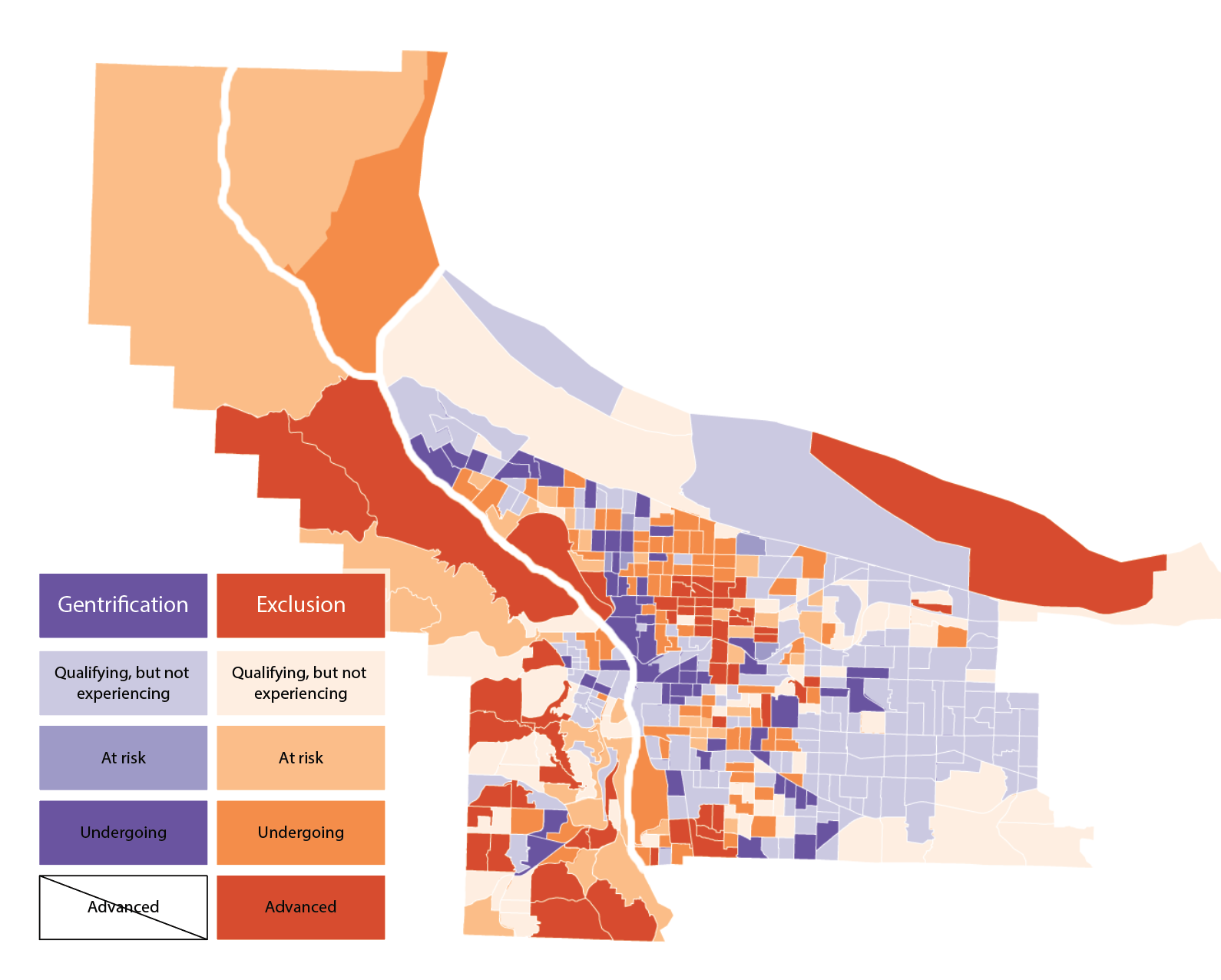 I borrowed categories and methods from Berkeley and UCLA’s Urban Displacement project to measure residential displacement in two categories: gentrification and exclusion. Gentrification occurs when a working-class or vacant area is turned into a middle-class or commercial area, while exclusion occurs when upper-class neighborhoods become increasingly homogeneous—both racially and economically.

I used census data to measure changes in median income, home value, rent, total population, racial distribution, educational attainment, and the number of renters from 2000 to 2014. These various factors were weighed and combined to produce a map showing the distribution and severity of gentrification and exclusion across Portland’s census block groups.

The clear patterns in the final map exceeded my expectations. In North and Northeast Portland, Alameda and Irvington are high-income and incredibly homogenous, a pattern that has spread to Alberta and even further North. St. Johns is also growing increasingly exclusive. The area that is gentrifying most intensely in N/NE—roughly between MLK and I-5—almost perfectly matches historically redlined districts.

Nearly all exclusion, whether in NE or SE, ends exactly at East 82nd. Unfortunately, much of the inner city, and in particular N/NE Portland, is already undergoing measurable or advanced residential displacement, emphasizing the need for policies that keep people in their homes. This project quantitatively validated my concerns about gentrification and exclusion in Portland and highlighted the decades-long legacy of racist housing practices and redlining.

Colin Kent-Dagget is an Urban Studies undergrad at Brown University, who grew up and, when home from school, still lives in the Irvington Neighborhood. For the full map (including more images and further analysis) can be found at https://imgur.com/a/Rr2xQ