1923 was a boom year for the Walnut Park section of what is now King Neighborhood. In addition to dozens of houses sprouting up almost like weeds, the Walnut Park Theater was built on the site where Natural Grocers is now located at Alberta and Martin Luther King, Jr. Blvd.

The theater opened on February 17, 1924. Built at a cost of $55,000 and with a seating capacity of 550, the theater featured a Spanish architectural and decorative motif.

Walnut Park resident Isaac Geller owned and operated the theater – built to replace his old Mutual Theater directly across the street.  The theater featured second- run silent films by the likes of Cecil B. De Mille, accompanied by an organist performing on what was billed as the “The East Side’s Largest Concert Organ”.  Helen West Cole was the theater’s organist at the time the talkies came in. 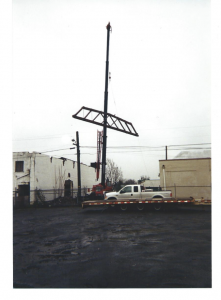 Friday matinees were reserved for “Ladies Only”; after the show the patrons could adjourn to Walt’s Eats directly next door for a lunch or fountain drink. The theater also rented time on the theater’s pipe organ to organ pupils for “reasonable rates”.

The Walnut Park Theater was an integral part of neighborhood life.  Among the theater’s projects was sponsorship of a Northwest Junior League baseball team, which played other firms’ and merchants’ teams. For example, on August 18, 1935 the theater team defeated Nu-Way Laundry, 12 to 8, in a game played at Alberta Park. The Highland Parent-Teacher Association often held benefits at the theater, holding an event in November 1937 to raise money for its school milk fund.

Not everything was so innocent, however. While in the theater’s cashier cage on December 18, 1946, Geller was held up at gunpoint and robbed of $22.80.  After being arrested – and identified by Geller as the robbers – in 1947 the two men were each sentenced to five years in the state penitentiary. 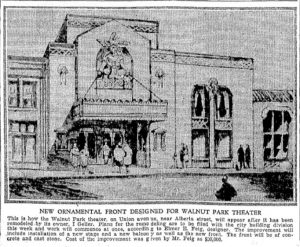 Still, the Walnut Park Theater remained for the most part a safe venue. For Thanksgiving week in 1953 the theater featured Shirley Temple’s “The Little Colonel” and “Rebecca of Sunnybrook Farm”. Nevertheless, as a result of competition from the new medium of television, movie theaters across the country were forced to adapt or close – and the Walnut Park Theater was no exception. Larger venues experimented with 3-D or Cinemascope, while smaller, inner-city venues often turned to “blue” movies.

By then owned by a California firm called H&R Management, the Walnut Park Theater temporarily closed on July 28, 1962 after a two-day run of “The Lovers.” The city of Portland had put the new manager on notice that the film violated a new city ordinance regarding “obscene films”.  For the next several decades the theater had constant run-ins with police until it permanently closed.

In 1983 a series of meetings were held by the King Neighborhood Association regarding possible new uses for the theater building, but the property was purchased by the Portland Development Corporation (now Prosper Portland), and then demolished in the early 2000’s.