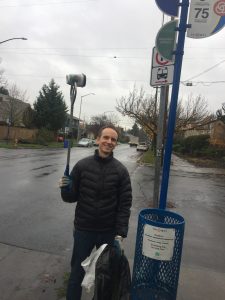 Rick Reynolds couldn’t get the problem out of his mind as he walked around his Woodlawn neighborhood. Everywhere he looked, it seemed the neighborhood was becoming trashy, and not in the sense of cheap romance novels. Rather, there was garbage and litter on the streets and sidewalks everywhere around his house.

Rick knew from his work creating educational resources with SOLVE and other organizations that trash—in particular plastic — is not just an eyesore, but also a growing environmental concern. “I kept thinking about how those plastic bags, cigarette butts, and other litter pollute our waterways and the ocean,” he says. “I just couldn’t let the trash blow around and wash into our sewers when I knew wildlife—from fish to birds to marine mammals and sea turtles—were being negatively impacted or even killed.”

Since moving into Woodlawn from Concordia seven years ago, Rick has taken to the streets, carrying a SOLVE bag on his jaunts through the neighborhood. At least once a week, he picks up trash wherever he finds it. He started out simply hoping others would take note and be inspired to do the same. Then he noticed that the biggest trash accumulation areas were centered on the bus stops along Dekum Street. In fact, most stops did not have garbage receptacles. So, Rick approached the Woodlawn Neighborhood Association about how to acquire more garbage cans and they recommended he contact TriMet directly to see how they might be able to help.

Rick called TriMet and was quickly able to secure three trash cans through their Adopt-a-Stop program. Then he developed partnerships with several businesses along Dekum that allow him to dispose of the waste and recycling in their receptacles.

Rick continues to patrol the neighborhood for trash and empty the cans about once a week with the help of other volunteers from the neighborhood association, including WNA Board member and Woodlawn historian, Anjala Ehelebe, who has been maintaining the can at the bus stop on NE 15th and Dekum. Neighbors have been pleased to notice that there is much less litter than there was before; a fourth can has already been installed on NE 15th Avenue and more may follow.

It is this type of grassroots effort, individual initiative, and sense of community responsibility that helps make Northeast Portland such a livable place to call home.

“It might sound weird,” says Rick. “But I love doing this.”

You can find out more about TriMet’s Adopt-a-Stop program at trimet.org/business/adopt-a-stop.htm or by calling 503-238-RIDE (7433). Rick is also happy to answer questions: rick@engagingpress.com