The first sign that this isn’t your average urban high school is the curriculum. There’s a class called Manhood, another called Skateboard Manufacturing. There’s Mindfulness, Leadership, a class on Rocketry. There’s even a class on starting a food cart business.

Walking the halls of the building, you realize there’s something else that’s missing: no crowded classrooms, no shouting, none of the usual chaos of a school environment. In its place is a certain ease that’s closer to that of family than an educational facility, with a noticeable familiarity between students and teachers.

This is Alliance High School at Meek, located at the eastern edge of the Concordia neighborhood in the building that used to house an elementary school of the same name (a second Alliance campus is at Benson High but has programming that’s distinct from Meek).

In its own way, Alliance, an alternative high school focused on career technical education, is challenging a lot of assumptions we have about the best way to educate Portland’s youth. And they’re doing it with precisely those students who have had the hardest time succeeding in the standard public school system. 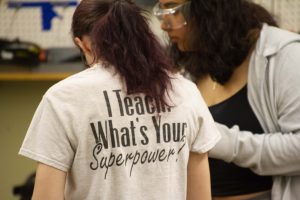 Almost all of the students at Alliance have dropped out or been pushed out of other high schools. Most come to Alliance with very poor grades and spotty attendance. There is a higher than average rate of students who experience homelessness, who are parents, or have been impacted by drugs or gangs. Many suffer from various forms of PTSD or anxiety. 100% of the students receive free breakfast and lunch.

They are what the school system likes to call “at-risk” youth. But their principal, Lorna Fast Buffalo Horse, prefers to think of them more simply as students who “learn outside the box.” To her, it means a fundamentally different approach to education. “We’re trying to unlearn for ourselves doing everything for the kids and to get in the habit that they are capable as kids and have their own thoughts on how to do things.”

“A lot of our students are coming from homes where there’s not a strong male role model, so it’s an important hole that we’re trying to fill.” 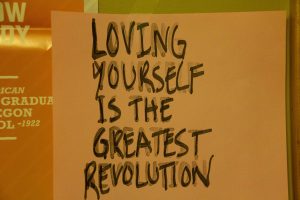 In a dimly lit classroom along the main hall of the school, a small cohort of students sit scattered among the tables as their teacher, Andre Washington, leads a discussion about the differences between sympathy and empathy. He then engages them with a video depicting a racially charged incident in a barbershop, and the patrons’ various responses to it. The idea behind the video is to test whether someone will speak up when a stranger acts out in public. At the end, the question left to the class is, “what would you do?”

This is Manhood class, and the point of an exercise like this is to have the students, all young men, put themselves in uncomfortable shoes, and challenge them to consider how they would act. There is, of course, no right answer. “It’s about learning compassion,” Washington says of this class. “A lot of our students are coming from homes where there’s not a strong male role model, so it’s an important hole that we’re trying to fill.”

Gaps in attendance and holes in performance are the main subject of the weekly staff meeting that takes place before the bell. Led by the principal, the group of twenty or so teachers munch on pastries donated by a student’s family before diving into the main focus of their meeting: to identify students who are struggling and to develop a plan to ensure they graduate. 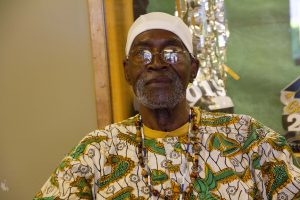 The conversation centers less around the student’s behavior and more about understanding what’s driving it. The compassion that Andre Washington was teaching students in Manhood class seems prevalent among faculty in this meeting as well. In the case of one student who has been missing classes, a teacher is able to shed light on their situation: the student has been battling depression ever since a recent death in their community.

It’s about purpose and passion versus just textbooks. We learn by doing.

Each student is assigned an advisor when they enroll at Alliance, and that advisor takes a proactive approach to helping them rebound if they fall behind. In this meeting, after identifying the students who need extra attention, the team of teachers split into groups and develop action plans, with their advisor as point person. As the principal remarks to the group, “It takes a village to get a child out of the village.” It’s this kind of hands-on attention that sets Alliance apart and will pay dividends to the students for years to come. 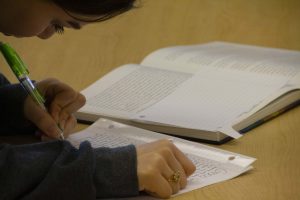 For one student I talked to, those dividends come in the form of grades and improved prospects. After arriving at Alliance with a 0.5 GPA, he currently holds a 3.5 going into his senior year. “Other schools have a narrow definition of success and look down on failure, but failure is learning,” he tells me at the end of a class. “Here, it’s about purpose and passion versus just textbooks. We learn by doing.”

If anywhere at Alliance were to have “learn by doing” as a motto, it would be the large industrial tool shop at the corner of campus. In a room full of drill presses, 3D printers, welding stations and DIY robots, whiteboards with sketches and design notes scratched out by students adorn the walls. This is the room where hard, job-readying skills are learned, with everything from skateboard manufacturing to robotics on the curriculum. 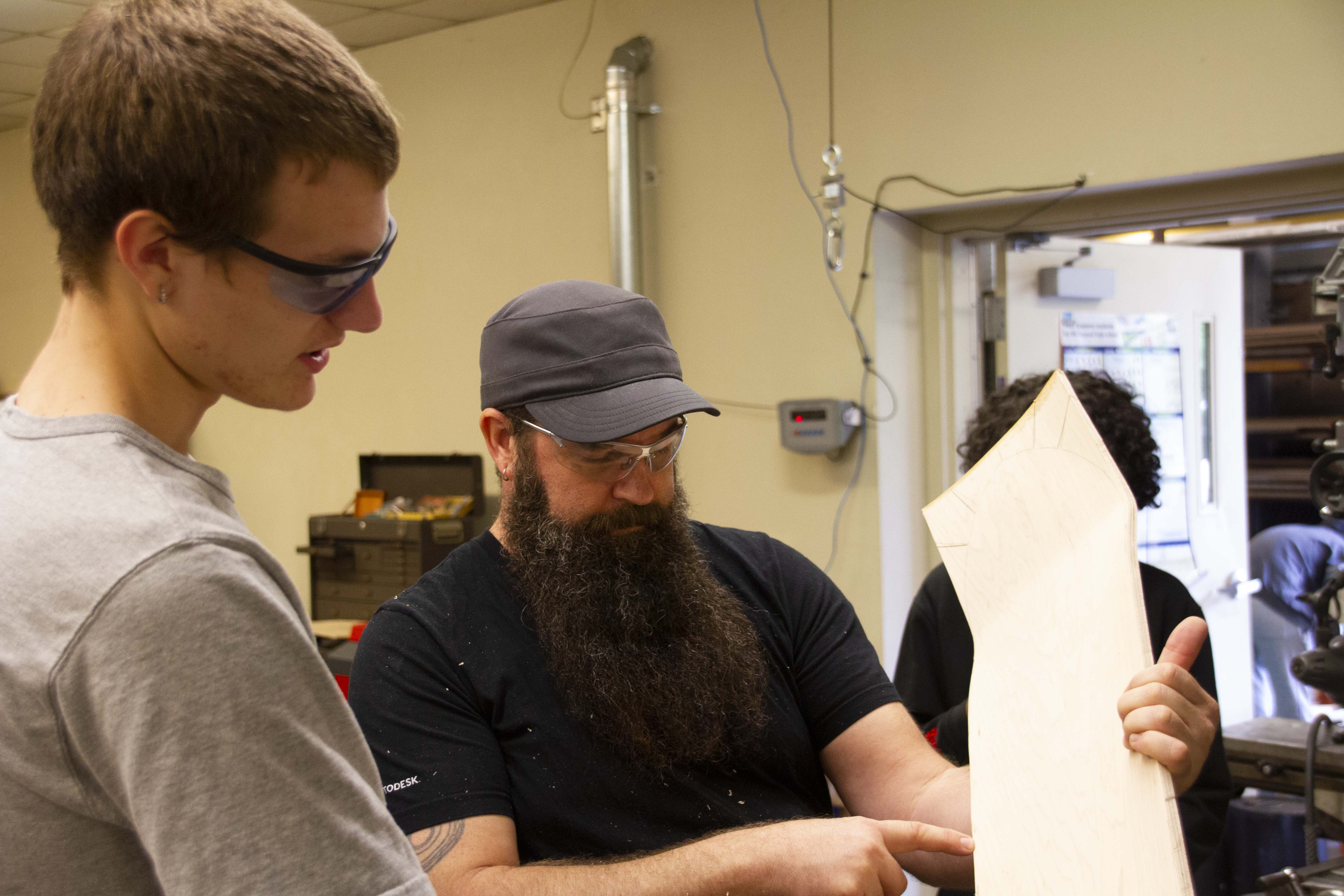 During a first-period skateboard class, students hover over various work stations under the watchful eye of their instructor, Jerry Eaton. In just a few short weeks, he has helped them develop the skills necessary to build their own skateboards, from drafting designs to layering composite wood to working a table saw. While teaching hard, employable skills such as these are a big part of Alliance’s philosophy, it’s clear the students are also learning softer skills such as patience, attention-to-detail and the boost in confidence that comes from executing a complex project successfully.

“we’re teaching them how to be good humans.”

One word you hear a lot at Alliance is family. Teachers speak about their students as if they were their own kids, and freely text them or their families to keep them on track with homework, or to track them down in the case of an absence. Many students told me the reason they like Alliance so much is because it’s like a second family, that they feel genuinely looked after and cared for. 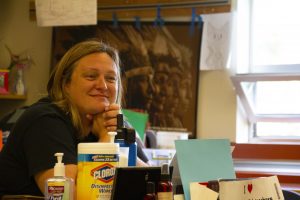 Alix Reynolds, the Reading and Language Arts teacher, agress. “One hundred percent of my job is relationships,” she tells me while sitting in her desk in the Gender Studies class where she teaches about the history and future of the LGBTQ community in America. She is, she says, part social worker, part teacher, and she sees the two roles as completely intertwined.

“These kids have grit,” she says. “Some are homeless, food insecure; they’ve been through more by fourteen than most of us have in a lifetime.” Because of this, then, the relationship with the student is the key. Without that, the learning doesn’t happen.

Alliance’s students are, in many ways, the outliers of the larger school system, a system that has a tendency to disregard those who don’t fit into a neat box. In schools, those outlier students are often the ones who struggle the most, who may need a little more attention than others or who, more often, simply need a different way to learn. They are, as one teacher told me, the diamonds in the rough. 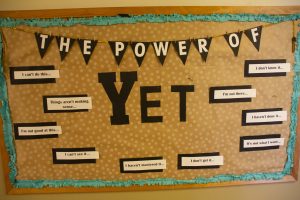 For much of what Alliance does, there’s no blueprint. Their student body is, by definition, unresponsive to a cookie cutter approach to education. They all have unique needs and distinct backgrounds, so the curriculum has to provide both a general education and a personalized touch that’s customized for the specific needs of a student.

On top of that, alternative schools around the region are also constantly battling the many social stigmas often associated with alternative education and the students they serve, as well as the constant fight that all schools face to maintain adequate funding.

But at a time when a single, standardized test score can be used to determine the entire fate of a school, at Alliance there’s something refreshingly personal, almost intangible, going on. Perhaps Reynolds put it best when I ask her how you approach educating kids who have been through so much. She smiles warmly, thinks for a minute, then states simply, “We’re teaching them how to be good humans.” 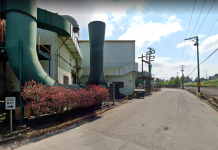