Now that the historic barbershop and salon Geneva’s has closed, what’s next for its stylists? 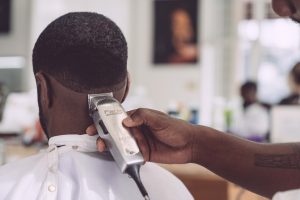 More important than any head they’ve touched, Geneva’s Shear Perfection Barber & Beauty Salon will be forever remembered as capturing the hearts of Portland.

It’s esteemed owner Paul Knauls decided to call it quits in May after nearly three decades in business at the NE Martin Luther King Boulevard location after COVID-19 presented unprecedented uncertainty for its future. And while the city continues to process the loss, one group remains particularly impacted by its closure — the heartbeat to its operation — the barbers and beauticians.

Now, the stylists are juggling the weight of losing this iconic business with the rest of Portland, while also searching for new employment during a global pandemic.

Tasha Bell has been with the shop for over 17 years. She and the rest of the staff received a personal call from Mr. Knauls the day before his decision was made public. Shocked, her first thought wasn’t about the loss of a job, but a loss of part of her community.

“I was emotional. I started thinking about all the memories, that part really touched me — that there won’t be a Geneva’s anymore,” she says. “My co-workers became my family. My daughter grew up in that shop,” says Bell.

While Geneva’s could never be replaced, she says the fact that the building will now be home to three other Black businesses (Joe Brown’s Carmel Corn, Kee’s Loaded Kitchen and Hana’s PDX) offers some resolve, knowing the property itself won’t become gentrified. 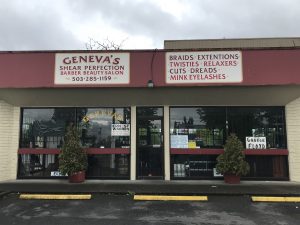 “He gave me a second chance at life”

Before the news, Bell says she had already been contemplating her next move after nearly two-decades with the shop. Now she is counting the closure as a sign to begin branching off on her own, though she was tight-lipped about the specifics of what that may look like.

Alvin Russell III isn’t sure where he’s going next. He came to Geneva’s 6 years ago, at a time where he was houseless and living “out of control.” In an attempt to make a change, he picked up the phone one day and asked Mr. Knauls for a job — he accepted.

“He gave me a second chance at life,” says Russell, who had no prior barbering experience outside of cutting from time to time. And while suddenly closure finds him cutting from home, he credits the shop with “blessing” him with a healthy roster of clients he hopes will follow him into his next venture.

For shop veteran Cynthia Riley, she says “it was like the rug being pulled from underneath me” when she learned of the closure.

“[At the start of] the pandemic, at least the thought was I know where I’m going back to. And now I don’t…” she says, adding she chose to work at Geneva’s in part because Mr. Knauls owned the building, and never figured he would sell it.

Now, she’s adjusting. After two months of pausing all services, Riley has slowly begun allowing a handful of clients and family members into her home to generate some income. Her preference is to immediately relocate back into a full-service shop. But with the growing Black Lives Matter demonstrations picking up throughout the region, she worries that the state’s re-opening will be slowed.

Despite such, employment is only a secondary worry. After 15 years with Geneva’s Shear Perfection Barber and Beauty, she – like the rest of her colleagues – say they will miss the daily interactions with Mr. Knauls.

“I worked besides him for years,” she says. “Mr. Knauls has a wealth of knowledge, and even when he’s not talking to me [I would listen]. Because people come through and seek his advice and mentorship, so just to be able to hear that was a blessing for me, and I miss that, definitely.”