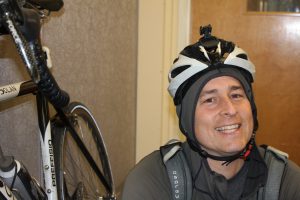 Greg Bourget cut his teeth in the Earth First! movement, and its decentralized and mission-focused philosophy informs all the work he does at Portland Clean Air. Unlike many other groups, PCA is not interested in affecting policy directly so much as it is in changing the actions of the polluting industries that policy would seek to mitigate. And they do that with the biggest leverage the public has: information.

“the purpose here is not to put industry out of business. You want to give them the tools to take care of the problem.”

Greg has managed to get access to pollution data from DEQ and can talk in minute detail about the amount and kind of toxins that individuals companies put in the air. Where DEQ fails to act, he takes the fight directly to industry, using publicly-available data as leverage to push them to clean up their act. But he stresses that it’s not about him, or PCA.

PCA is structured around what they call a “spokes” strategy, each community connected with one another through shared resources and common interest. PCA counts 32 spokes across Portland but, importantly, PCA doesn’t set their agenda. Greg describes their structure as an inverted pyramid, with the communities deciding on priorities, and PCA supporting them with data, media support, or even a campaign team. He says that community members are the real experts and that they know what their communities need the most.