On a Monday morning, J.P. King starts up the engine to his pick-up truck and heads across the river from Old Town to the Inner Eastside. As the lead crew member of the Northeast Coalition of Neighborhoods’ (NECN) pilot program, Clean Start PDX, he will spend the day making the rounds to various outdoor encampments in the inner northeast area, and working with the residents there. 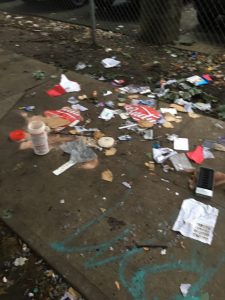 He cleans up abandoned camps, provides garbage bags and other cleaning supplies to active sites, and removes debris as needed. But to J.P., it’s the one-on-one contact with residents that makes the real difference, whether it’s directing people to shelters or connecting them with other resources in the city. “I know everyone in these camps by name, “ he says. “They know I’m here to help.”

The program began last year when Adam Lyons, Executive Director of NECN, was hearing from community members about the increase in trash and debris on roadsides, along with an increase in campers. “It’s a livability issue,” he says. “But it’s also a symptom of a much greater problem.”

So, in partnership with Central City Concern, the Central Eastside Industrial Council and the 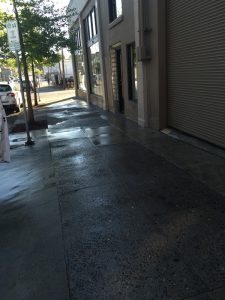 Eliot Neighborhood Association, NECN secured funding from the city to address the issue in the inner-eastside core. Based on the same model that the Clean and Safe program uses, the idea isn’t to enforce camping policies for the city, but rather to help make the city cleaner and nicer for everyone who lives here.

In fewer than six months of operation, it’s making a big impact: between August and October alone, J.P. and his Clean Start PDX crew have cleaned up 149 camps which included nearly 2000 bags of trash and 779 needles, and all manner of bio-hazardous materials.

Perhaps the most remarkable fact about Clean and Safe and Clean Start PDX is that it’s tackling multiple issues at once. It’s not just a cleaning service for the city streets, but is in fact a job-training and skills-building program to help individuals with a history of homelessness, addiction, or incarceration build a better future for themselves.

“The program is a triple win,” says Jay McIntyre, program manager for Clean and Safe and 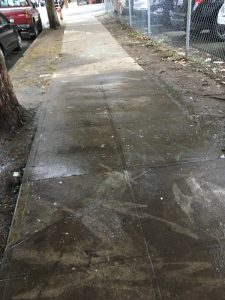 Looking forward, NECN hopes to use this model as a template for helping other neighborhoods do the same, to the benefit of the whole city.  “We’re trying to be proactive in solving a problem that most residents say is top of their list of concerns in Portland,” says Lyons. But he is quick to point out that, in so many words, it takes a village:

“This isn’t an isolated problem, or one that’s unique to Portland. It’s complex and difficult, and it’s important that we as neighbors, businesses owners, and especially city officials take charge and try solutions instead of just throwing our hands up in frustration. It’s up to all of us to make this city the one we want to live in.”