If you were to walk by a certain apartment building in the Lloyd neighborhood this past summer, you might have heard some shouting, a few screams, or laughter. Depending on the day, it may have sounded like a party, or perhaps a crime scene, but in fact it was a recording session for Husk, the new podcast from a pair of young Northeast residents, Emma Brown and Sean Abplanalp.

It was just shy of a year ago that these two born-and-raised Portlanders met at a trapeze gym near Lloyd Center. Sean, a writer, musician and actor, knew he wanted to make a podcast, but didn’t know which story to tell. 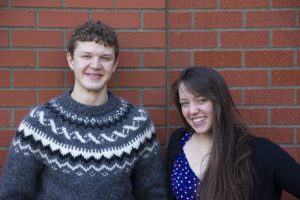 Emma works in marketing and harbors a love affair with both Russian literature and the popular role-playing game, Magic:The Gathering. Through casual chats at the gym, they discovered a shared love of storytelling – podcasts in particular – and in no time, they were hatching a plan to make one of their own. Only problem was, they had no idea how.

What they lacked in experience they made up for in discipline: despite barely knowing each other, they kept a rigorous meeting schedule and sat every Tuesday in the same coffee shop, scribbling notes down on yellow legal pads and fleshing out their ideas.

Once an outline was in place, they each tackled an episode on their own, then swapped scripts so the other could edit. By the end, they had lost track of who wrote which one. “We were really speaking with one voice,” says Emma. Just nine months after that first conversation they were finished, and a new podcast was born.

The podcast itself is unique, captivating and distinctly Oregon: familiar sights and landmarks dot the storyline, which follows the mysterious disappearance of a young man named Demitri, and the subsequent effort to find him. An underlying supernatural element unfolds throughout the story and feeds the Oregon folklore. Revealing much more, however, would give away some good twists.

For anyone who is considering making a podcast of their own, they both stress that the key is to just get started. Instead of shelling out hundreds of dollars for studio time, for example, they jerry-rigged Sean’s one-bedroom apartment with blankets and pillows to soundproof the room for recording.

It’s all part of their philosophy for making art that could also serve as advice for just about anything else in life. Sean sums it up this way: “Don’t wait for it to be perfect or you’ll never do it.”

You can download episodes on iTunes and other platforms and find out more at: www.HuskPodcast.com