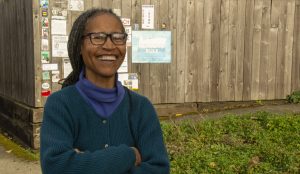 Activist and Alameda resident Karen Wells carries a business card with the job title “change agent.” It’s a phrase that sums up her approach and five decades of social justice work aimed toward a long-term goal.

“What keeps me going is hope.” she says. “Hope that the walls of isolation will be dismantled. Hope that the pitfalls of white supremacy will be eliminated. Hope that the differences between people can be celebrated instead of disparaged.”

Karen experienced the effects of white supremacy and related oppression early in life. She grew up in the 1950s and 1960s in the Memorial neighborhood of San Diego, California, the middle of three children from a working-class family. Her parents were active in local school functions. Her Dad, a barber, kept a watchful eye business politics and urban development of the neighborhood along Imperial Avenue.  Exposure to TV coverage of civil rights movements, coupled with surviving and navigating incidents of racism while growing up in San Diego awakened Karen to the importance for social change.

“My earliest memory of being different, that is ‘not white’, occurred around the time I was four years old. The white neighbor child insisted I wash my hands, because my hands were ‘dirty’ (brown),’” Karen recalls. “I was not allowed to play in their home or yard. We ‘played together’ through the cyclone fence that separated the two properties until the mother put an end to our play.”

Throughout the years, episodes of racism/white supremacy erupted in her life—sometimes overt, sometimes subtle—which continue even today in Portland. By her late teens, Karen became an activist.

After moving to Oregon in the mid1970s and through the 1990s, Karen was involved in local womens’ culture and the progressive political scene , was a performance artist and poet and served on boards of gardening-focused nonprofits Groundwork Portland and Our Garden. Karen says that within these organizations , she was often the only black woman. She was often subjected to the covert pressure to fulfill the unwanted and awkward role of “representing” the “entire black community of Portland.

As part of her journey, she embraced different approaches to social justice work over the years. By the time she hit her mid 30s, she says she realized  that white folks weren’t listening. Emotionally exhausted, she changed tactics. “I decided ‘each one teach one’ was the best way to go,” she says.

“Each one teach one” is an African-American proverb that originated during slavery. When few enslaved people were literate, those who could read felt a duty to teach others. Karen’s approach to each one teach one is aimed at broadening perspectives, one person at a time.

An Alameda resident since 1998, Karen enjoys gardening and decorates her fence with posters and signs of social justice movements for all to see. She hasn’t always felt welcomed in the neighborhood. “For the first 10 years living at my current home, whites assumed I was the maintenance person or the gardener, the hired help,” she recalls.

Today Karen continues to work to improve the lives of oppressed/marginalized groups and writes for Concordia News on public art, education and other topics. She still practices each one teach one, and in recent years has volunteered with Health Care for All Oregon and Nasty Women Get Shit Done. Karen is active on the planning committee for Portland Womxn’s March 2020, which sprang from the 2017 Women’s Marches following the inauguration of President Donald Trump.

For potential allies who want to support Karen’s and others doing social justice – social change work, she asks for a change in mindset. “Believe us. See us. Respect us,” she says. “The number one thing you can do is step up.”