Hey Neighbor: How long you have you been in this neighborhood?

I was born in Portland, my mother was of Irish descent from Canada and we grew up in S.E in my early years. Being a hairstylist, one of my clients had gotten a good deal on this house and she was having trouble finding people who wanted to move in. I rented the house in May of ‘76 and I purchased it in December of ‘96.

During the ‘80s, none of my friends hung out here, they would either drop me off or pick me up. There weren’t restaurants on Alberta like there are now. By the time crack cocaine infected the neighborhood, I had bullet holes in the back of my garage which I’m kind of proud of…we all lived through that, and we all tried to still be good neighbors. 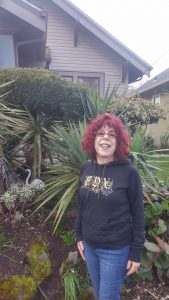 What is sad about gentrification is many people who were displaced, were older than me, they had owned their homes, stuck through all the horrible times and had to deal with the drive-bys. It is when taxes went up and they couldn’t refinance, I feel concerned that many were screwed out of their houses.

I remember in the 70-80s, that there were many dilapidated warehouses here, plenty of bars yet they did not sell any hard liquor, there were just taverns.

The businesses I remember, was the Johnson family had a fish market and their daughter was the first Black Rose Festival princess. I actually sat on one of the soda fountain stools at the old Rexall Drug store (currently home to Just Bob on Alberta) and spun around.. it closed shortly after I moved in and was vacant for a long time.

H.N: Do you remember when there were other clubs in the neighborhood?

My significant other was a founding member of a Biker club “Brothers Free”. Their club was predominantly Black but they allowed White members too. One thing they did was host an annual easter egg hunt at Alberta Park. I remember hearing all these men yelling at these kids: “over there, over there” as where to find the hidden prizes.

It was a regular activity for years, the Easter egg hunt. During those times, there were many struggling low income families that appreciated the Easter egg hunt. These bikers would get these kids outside all day and every year. One can hear those big burly bikers on a megaphone as they fed the neighborhood, they also held a toy donation run around Christmas.

It’s interesting, how this area is now wealthier, but for years, when folks had less, there was a lot that was done under the radar, that nobody knew about.

H.N: What else do you remember about the family make-up of the neighborhood?

I do notice that there is a lot less children out, but we are living in the electronics age and maybe the youth are not getting outside, like we did, going to parks and playing b-ball.

I think back when I came into the neighborhood and there was nobody of my age bracket and that was white, so I could tell it kind of might have been a big deal at the time.

I remember that there were many established households around here in ‘76. People were neighborly but it was also like, mind your own business, and so that’s how it’s different now. People are more outgoing now, but when people ask me if I think it’s better now, in some ways yes, but in some ways no.